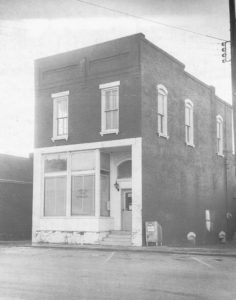 History of the Clover Public Library District
Free public library service was unavailable to the Woodhull community before
1937, other than school and church libraries.
The Women’s Christian Temperance Union (W.C.T.U.) sponsored an Association
Library on June 30, 1937. The library was housed in the private home of two
sisters, the Misses Maud and Martha Cain; with Martha as librarian. The budget at
that time was $100.00 per year plus gifts.

Both sisters became ill in January 1965 and had to leave their home. Finding it
necessary to move the library to other premises a series of town meetings were
called and representatives of various organizations formed a committe and rend
the former Farmers State Bank building.

On May 1, 1965 the library reopened with Miss Frances Rehn as librarian. It
continued as an Associate library run on donations until July 17, 1965 when the
Township voted in favor of forming a Township library.

In July 1965 the board voted to join the Western Illinois Film Cooperative which in
now the Alliance Library System.

Frances Rehn resigned in 1978 and Mrs. Coralie Null became head librarian and
remained head librarian until her retirement in May 1995. Rene Bramlett has held
the position since.

The year 1978 was a very special year for the Clover Township library as it was
then the library board was approached with an offer to build and furnish a brand
new Township library. The Woodhull Women’s Christian Temperance Union
decided to disband and dispose of some property near Kewanee, Illinois which
they owned; using the money from the sale to build our present library. After two
years in first the talking then the building stages; the new library was ready to
move into the new location at 440 N. Division St. the last week of January 1980.
The old library was closed for two weeks while the transfer took place and our new
library opened it’s doors. Open house took place May 4, 1980 with many visitors
touring the facility.

Since then our collection continues to grow along with our circulation and hours.

Mrs. Mieneer gave the library a beautiful grandfathers’ clock in memory of her
three sisters who were teachers many years ago in the Woodhull area. The clock
was delivered and set up in time for the open house.

During Woodhull’s Quasquicentennial in 1982 the new library displayed much of
the Woodhull area history plus arts and crafts of the residents’ quilts from the late
1800’s to 1982 were also on display.

Because the new library is both beautiful and air conditioned it was a very busy
place during the Quasquicentennial which took place during a very hot July week.

Since then the Jaycees have given the library a television set and VCR on which
the public can view tapes of all the Quasquicentennial activities from first to last;
the tapes also were donated by the Jaycees.

The library now has a lovely community room that is used for Story Hours and the
Summer Reading Program. It is also used by various other community groups on a
regular basis. The room can be reserved and used by any non-profit organization
with no charge if they are in the AlWood School District.